The Hawken House was the home of Christopher and Mary Ann Hawken.  It was built in 1857, and owned by the Hawken family until 1912. Several other families later called this house their home until it was purchased by the Webster Groves Historical Society and moved to its current location in 1970.  Graciously furnished to reflect a post Civil War home of a gentleman farmer, the Hawken House Museum preserves the artifacts and the stories of the Hawken family’s era. 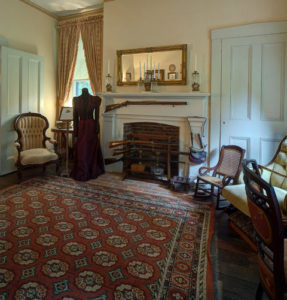 Christopher Hawken’s great grandfather, Niclaus Hachen, came to America from Switzerland about 1750, settling in York County, Pennsylvania. With a family history of gun-smithing, some of Christopher’s ancestors soon plied their trade at the Harper’s Ferry arsenal, near Hagerstown, Maryland,  where they made rifles for the U. S. army. His father, Jacob, came to St. Louis in 1807, where he began crafting the famous Hawken Rifle in a shop on the Mississippi Riverfront.

Jacob’s younger brother, Samuel, joined him at the gun shop 1822. That same year, Jacob married Catherine Allison and purchased their first home from Thomas Hart Benton at Main and Washington Streets. It sat across the street from Pierre Chouteau’s residence, about where the Gateway Arch stands today. Jacob and Catherine had four sons, Christopher being the second-born (1825-1905). 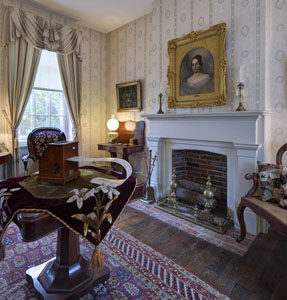 Historians call the coveted Hawken Rifle the “gun that settled the west,” since it was prized by so many famous westward explorers and trappers, including Daniel Boone, Davy Crockett, Kit Carson, John Fremont, Jim Bridger, and Robert Campbell, the famous St. Louis fur trader. To find out more about the Hawken Rifle, visit The Hawken Shop.

After Jacob died in 1849 of cholera, Christopher left his father’s shop, heading west to California to try his luck in the Gold Rush. Family legend says he took along his father’s last Hawken Rifle. A year after he returned to St. Louis in 1854, Christopher married Mary Ann Kinkead Eads (1836-1878), when she was 18 and he was a month shy of 30. Soon afterwards, he paid 25 cents an acre for 100 acres of land in “the country,” where he began farming and building the Hawken House, which was completed in 1857. As a “gentleman farmer” Christopher increased his land holdings to 265 discontinuous parcels extending south from Big Bend Road to Watson Road and west from Rock Hill Road towards Kirkwood. 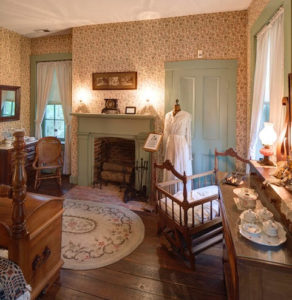 Mary Ann Kinkead Eads was the daughter of Granville Eads and Lucinda Sappington. Mary Ann and Christopher had nine children: eight boys and one girl. Only three of the children survived to adulthood, including their only daughter, Mary Emma. It is believed that Mary Ann died of typhoid fever in 1878; Christopher never remarried. Following a fall from his hayloft in 1900, he left Hawken House to live in Kirkwood with his son, Jacob, a Washington University graduate who practiced law. Christopher died in 1905 at age 79.

The Hawken family burial plot is located at Oak Hill Cemetery in Kirkwood, along Big Bend Road to the west, just beyond I-44. Oak Hill is also the burial site of several members of the Sappington and Eads families, in addition to many other early Webster Groves residents.

For more information about Christopher and Mary Ann, come visit us and take a tour of the Historic Hawken House Museum.

We would be happy to arrange a tour for your group.

The Hawken House Museum is an active member of Historic Saint Louis, an organization comprised of historic homes and sites throughout the Greater St. Louis area.  Historic Saint Louis provides a forum for communication among historic sites for the purposes of networking and education, along with opportunities to promote the wealth of historic preservation in our area.